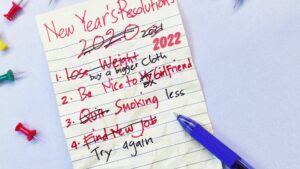 The first reason New Year’s Resolutions fail is that people are not committed. They are interested in becoming better, but interest never goes past an obstacle. When people are interested, they say things like: “It would be nice to be thinner,” or “I would like to exercise more.” Those are not committed statements. They are entertainment statements—statements that people entertain in their heads for five minutes before moving to the next idea.

To move toward a real goal, you must find a reason that lights up your soul, something when you think about your goal, you act on it. You stop talking and start acting.

Most people don’t know that they have a belief that prevents them from successfully achieving their New Year’s Resolutions. Limiting beliefs are thoughts that were planted in their brains by parents, grandparents, teachers, siblings, or peers. Without realizing it, people think of the negative thought so many times that the thought becomes a truth in their minds.

When you have good intentions to change, but can’t seem to make progress, you have a belief that keeps you stuck. Four limiting beliefs that you might have:

ü I am not good enough.

ü It will never work out anyway.

ü I can’t sustain enough effort to make it work.

ü I am afraid that I will fail.

These beliefs will not allow success. You must clear them so that your brain believes in a better outcome.

Get Clear on What You Want

A friend of mine wants to be a well-paid speaker. Her goal seems clear, but she is not clear on what her subject matter is, who her audience is, what kind of money she wants to charge, or what kind of problem she will solve for them. She has built five websites, spent thousands of dollars on social media, created five online programs, and has not yet made enough money speaking to pay her monthly bills.

If you don’t know where you are going to go and what you want, if you fail to be clear in your New Year’s Resolutions, you will never get there. It sounds like a simple concept, yet so many people flounder with clarity.

See It and Feel It

For many years, there has been a focus by success gurus on saying affirmations. They say, “Fake it until you make it.” When you believe that you are faking it, do you believe it is real?

Affirmations are great, but not when you don’t believe in the words that you are saying. A resolution stated a thousand times without belief makes it an empty resolution.

Train Your Brain to Be Positive

Most people let their thoughts think them or their negative emotions run their daily activities without realization that they have zero control over their minds. They’ve allowed negative programming to run their lives.

One of my coaching clients told me that she will never get past an old trauma. That trauma runs her life. I understand that past events can be harmful and challenging to move beyond, but when you say, “I will never get beyond the trauma, “ you are reinforcing that belief, which will eventually become a limiting belief.

You can stop a thought before it gets moving too fast. You can change the direction of the thought or the emotion. It takes awareness and desire, and it can be done.

You don’t have to make a New Year’s Resolution to begin a new journey. What you must do is get committed, clear your limiting beliefs, gain clarity on what you really want, see your goal, and feel it, and train your brain to be positive.

**Sherry Winn is a Two-Time Olympian, National Championship Coach, and an Award-Winning Speaker and Author. To find out more, visit her website at https://www.thewinningleadershipcompany.com/