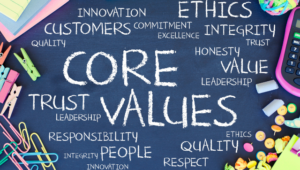 In the past few weeks, we have witnessed government leaders who have lied, betrayed, and twisted the truth for their own gain. I would love to say that this is the first time I have witnessed such behavior, but it is not, and it will not be the last time. People who gain power and money often lose sight of values. After all, if they get the “win,” then their actions will be excused.

During my 23 years as a collegiate basketball coach, I witnessed this behavior repeatedly. There was not a single multi-game recruiting trip where there were not coaches berating, demeaning, and even demoralizing their players to secure the victory. The parents of the players, sitting behind the bench, witnessed the entire shenanigan, and kept their daughter on the team, because the coach was successful. Why? Because being on a successful team gave their daughter a greater chance to earn a college scholarship.

Success is the ultimate ego motivator.

When leaders are successful, they get more recognition from the media, more fame, more money, and ultimately the power to control others. These are heady achievements and difficult to separate what is right from wrong, especially when there are individuals riding coattails, in total agreement with their leader’s decisions for personal gain.

THE HOUSE OF SAND

The obstacle with the leader justification approach is not the ultimate victory, but the cracks in the organization left behind each negative action.

With each deception comes a cost to individuals and ultimately an organization. Treating people poorly, cutting corners, and ignoring policy creates an underground current of animosity and eventually rebellion. While leaders can blame others for the wake of destruction left behind, that wake will ultimately catch up to its origins.

There are no escaping poor choices—only the illusion of escape.

When leaders fail to have values and live by those values, they are building a house of sand. The sand will hold until a hurricane hits, and then falls so hard and fast that any person standing inside will be buried. The house of deception can stand for years, but ultimately it will fail. Just ask Jimmy Swaggart, Adolf Hitler, Joe Paterno, the USA Gymnastics Federation, Jim Bakker, or L. Ron Hubbard.

WHY SHOULD A LEADER LIVE BY VALUES?

In American society, we praise leaders who win. We rarely distinguish between those who win fairly and those who cheat…until they get caught.

Why then, should leaders do the right thing at the right time in the right way if they might get away with cheating for years? This is the difference between leaders who want to give and those who want to take. Takers only care about their success. Givers care about the success of all their team members.

Takers eventually get taken while givers receive the higher gifts of receiving joy, peace, and happiness.

Takers will never be satisfied. There is always another victory to be had no matter the cost to the people surrounding them. Givers consider each person, the ramifications of every action, and ultimately how their decision will affect their community and environment.

Rich Sheridan, CEO of Menlo, suffered severe blows to his company due to COVID. His response, like many of the CEOs that I speak with, was that of a giver. Rich was transparent with his team members about the financial situation. He discussed the outlook of the company. He let them know when cuts would have to be made. He spoke earnestly and compassionately. Rich fought for ways to keep each employee for as long as possible. When cuts did have to be made, he spoke with each member personally.

Rich’s team will rebound. They will recover their business because their leader acted with values and compassion. People follow givers and give back in return, which grows not only their company, but their families and the community.

Which leaders will ultimately make the bigger difference—those who earn money and fame through deceit or those who teach honor, respect, and love? Leaders can do both–earn fame and success while being authentic, trustworthy, and kind, and it takes strict adherence to values to be a leader of leaders and a visionary of visionaries.

3 thoughts on “Is It Okay to Justify Poor Actions for Good Results?”