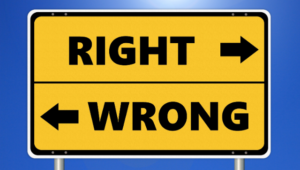 You have heard the quote: “That is why you are getting paid the big bucks.” Leaders often receive this answer when they complain about challenging decisions as if getting paid more money makes the ethical dilemma easier.

Last week, when speaking on the social media platform, Club House, I heard an interesting idea around ethical dilemma. The idea was that you should not have any ethical dilemmas when living your values. I thought that idea to be interesting, so I examined my past.

The Easy Way Is Rarely the Way

Imagine you are an athlete in the Olympic Games. You have just signed a contract with your federation to be the assistant national team coach after the Olympics. Three weeks before the Olympics, your head coach begins skirting the line between friend and coach. Because you signed the contract, you are not certain if this new relationship between the two of you constitutes as flirting or a new coach-to-coach paradigm.

Confused, you no longer understand the boundaries. Once you enter the Olympic Village, he grabs you in an elevator, presses his body against yours, and plunges his tongue into your mouth. The question about lines is clear. Your coach is sexually harassing you, utilizing his power to make saying “no” feel impossible.

The pathway moving forward is not so black and white. Your values are clear: integrity, courage, reliability, and passion, but the road between your values and dreams is hazy.

The message sent via the federation was clear: complain and you are gone.

If you inform anybody in the federation, the goal of playing in the Olympics, something you have been training since the age of seven is shattered. The aspiration of being a future Olympic Coach is obliterated.

Your values and dreams are on a collision course. This is the reason that your predicament is an ethical dilemma—you might lose all you have ever desired.

How to Navigate This Ethical Dilemma

I admit that I did not do a great job of navigation unless you consider booze the best means. Without a map, the road was fuzzy. I was angry, upset, mad, depressed, and ready to exact revenge.

Although I made the right ethical decision, reporting the coach, which resulted in getting pulled from my final Olympic and career game, and being fired from my position as assistant coach, the roadmap to get there was not a clear one…especially with whiskey flowing through my brain cells.

Here are four questions that could have assisted me and can support you in ethical dilemmas.

While ethical dilemmas are rarely resolved easily because the dilemma is often between what you want and what is right, with these four questions, the pathway becomes clearer.

The next time you are caught in an ethical dilemma, stop, ask the four questions, gain clarity, and with wisdom, align with your values.

Oh…and although my dreams were ripped from me, my soul was not. It ended up that my soul was the very thing needed to enjoy a successful life and career.